ISIS’ Use of the Internet in South-East Asia

The Islamic State is most infamous for its brutal expansion in Iraq and Syria, though a deeper look into the organization’s online activity shows that the states of South-East Asia have a lot of reasons to fear the organization as well.

Since 2014, ISIS (The Islamic State of Iraq and a-Sham) has claimed the leading position of global Jihad, due to its rapid expansion in the Middle East and its brutal methods of execution. It appears that the organization has mastered the art of PR, as it uses a vast number of social-media accounts to distribute its videos, often edited carefully to present Hollywood-like effects. It has long been known that the organization relays heavily on the internet for recruiting new members and distributing propaganda.

Though the organization is mainly associated with its operations in the Middle-East, further look into its online activity may prove that it has a broad base of supporters in the South-East Asia region, where the world’s largest Muslim population resides. According to reports by officials in Indonesia and Malaysia, Hundreds of militants from those countries have reportedly joined the Islamic State in Iraq and Syria. Upon their return, they might pose a concrete threat to the whole region.

On July 2014, a suicide bomb attack in Syria by a Malaysian militant has highlighted the presence of South-east Asian fighters in Syria's civil war. Another 15 Malaysians have also been reportedly killed in clashes, while Indonesian militants were also featured among the dead in Syria and Iraq. Many of them were said to have fought for the extremist Islamic State in Iraq and Syria (ISIS), which its leader Abu Bakr al-Baghdadi has declared to be a transnational "Calipha”. Among the Indonesians killed were alumni of different Jemaah Islamiah-linked schools in Indonesia. According to official Indonesian statements as of September 2014, 66 Indonesians traveled to join ISIS. One prominent Indonesian member of the organizations was Abu-Muhammad al-Indonisiy, who has recently died in Iraq during a suicide mission. Other two Indonesians also reportedly died fighting for ISIS. That said, security analysts believe the number of Indonesian fighters in Syria is greater than the government estimate of 66. The government anticipates that if some do return, they will do so with new skills and a renewed ideological commitment to conduct armed jihad. 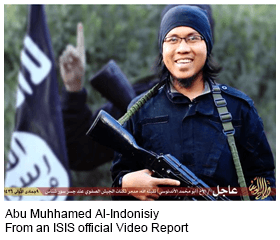 On June 2014, the Malaysian police has revealed that more than 100 Malaysian radicals are in the Middle East, Fighting for ISIS. Those who have been detected travelling to Syria and Iraq to wage jihad come from different walks of life, and are recruited, according to the police, using the internet. Police views Malaysians who participated in jihad abroad as a threat to national security when they have returned home. On March 2015, Two Malaysian radicals – Muhamad Wanndy and Mohd Farsy, were exposed to have joined ISIS forces placed in Raqqah, ISIS’ de-facto capital in Syria. The two are also suspected to be involved in the decapitation of a prisoner in the area. Wanndy and Farsy are said to be only two prominent examples of the growing involvement of South-East Asians in the Middle-East conflict. Majmu’ah al Arkhabiliy is an Indonesian-Malaysian unit under the command of the Islamic State, which according to security officials, has about 100 members, and stationed in Raqah, Syria. About 50 families of Malaysians and Indonesians are said to reside in the city at the same building complex.

But the danger posed by Islamic extremism does not end only with the exportation of militants to Syria and Iraq, since local terror cells and organization have already pledged allegiance to the Islamic State, thus bringing extremism to the region itself. In Indonesia, the leader of Jamaah Ansharut Tauhid (JAT), Abu Bakar Bashir, has recently endorsed ISIS precisely because it has established territorial control and a semblance of a governing authority. This serves to re-energize attempts to create jihadi safe havens - a strategy that has underpinned various violent campaigns over the years, including the bid to set up a militant base in Aceh in late 2009. Another, led by Santoso's Mujahidin Indonesia Timur (MIT), is still being actively pursued in Poso today. Thus, the number of ISIS supporters in Indonesia has increased noticeably. They include existing jihadist groups and their supporters as well as non-violent radicals. MIT and JAT are among those that have sworn allegiance with or endorsed ISIS. New groups, too, have been formed in direct support of ISIS. They include Anshorullah, whose members have publicly declared their intention to fight in Syria, and Anshar Al-Daulah, whose members are more inclined to promote ISIS through community- based events like charity work. ISIS sympathizers also come from pro-Syria advocacy groups and religious vigilantes known for their anti-vice activism. In Malaysia, groups and local cells have also formed in their support of ISIS and its global-Jihad agenda. Since April 2014, Malaysian police have arrested 11 people (eight men and three women) suspected of being part of a jihadist network, the Kuala Lumpur Cell. They were arrested near Kuala Lumpur and in Kedah. The group is accused of planning militant attacks inside and outside Malaysia as well as recruiting fighters to support jihadist groups in Syria, using humanitarian assistance work in Syria as cover. The group, known as the Kuala Lumpur cell, or Katibah Nusantara Lid Daulah Islamiyah , has been active since 2014.

In many cases where identities of South-East Asians in the service of ISIS were exposed, social media accounts and profiles of the militants were discovered in hind-sight. That was the case, for example with Abu-Muhammad al-Indonisiy, which had posted several times on global Jihad forums. Many of those forums are Arabic-written, and used by Jihadists world-wide to acquire tutorials which can be used for terror activities, distribute propaganda or discuss issues related to the Islamic world.

Muhammad Wanndy, the Malaysian ISIS militant positioned in Raqqah, had a Facebook profile named “Abu-Hamzah al Fateh”, which uploaded a video of ISIS’ along with the caption: “This video shows the punishment of thos who betray Islam”. The account have been erased since. 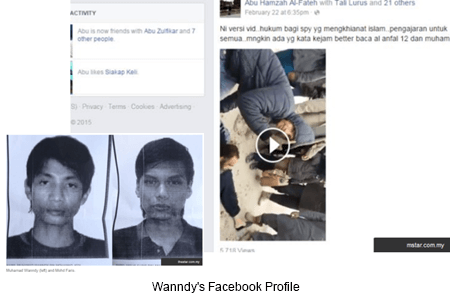 Practically speaking, monitoring of potential Jihadi activity online may prove, given the above findings, to be a useful tool for combating ISIS’ expansion to the region.

The social media is filled with Malaysian and Indonesian account, pages and groups offering their support to ISIS and the cause of global Jihad. In addition, Islamic webpages and blogs, mainly Indonesian, often share content written by ISIS militants and supporters.

Islam al Busyro, for example, is an Indonesian forum, functioning much like other prominent global Jihad forums. In the forum’s various sections, one could find propaganda distributed by ISIS and its affiliated organizations in the region, tutorials, and discussions of Islamic nature. The forum itself has been shut down recently, though it still operates an increasingly growing Twitter account.

An Analysis of the account followers’ locations, brought up that the majority of them are indeed from Indonesia, though a few users follow the forum’s contents from the Middle-East, Europe and the US: 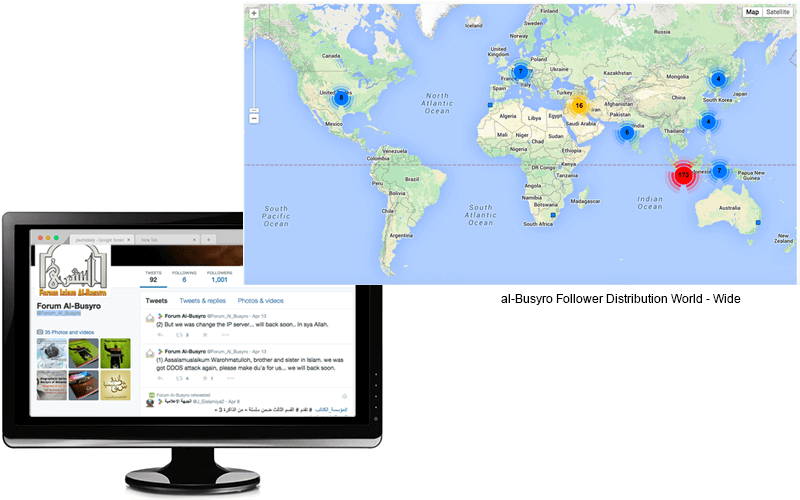 Another prominent platform for ISIS supporters online is the Indonesian website daulahislamiyyah.com, which publishes pro-Jihadi materials, mostly ISIS propaganda translated to Indonesian and MIT statements. The materials published can be used to recruit new supporters in the country. The website’s prominent content writer is a user called @Louis_119, who also writes in the following blogs:

Using a network of social media profiles and pages, websites and blogs, ISIS supporters in the region have managed to set up an infrastructure for the organization’s expansion to the region. Militants from Indonesia and Malaysia are joining the organization’s ranks only to return in the future to their countries with practical knowledge and extremist ideology. In the meanwhile, local terror cells and organizations pose an immediate threat to the region’s security.

That said, the vast usage of online techniques by extremists in the region may also aid security agencies in early detection of potential threats, in order to better prepare against them in the future. 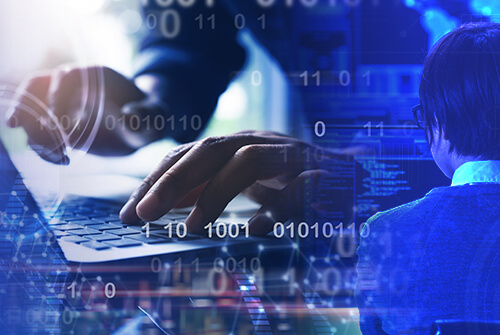 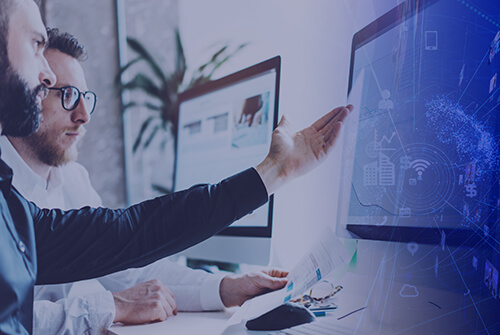 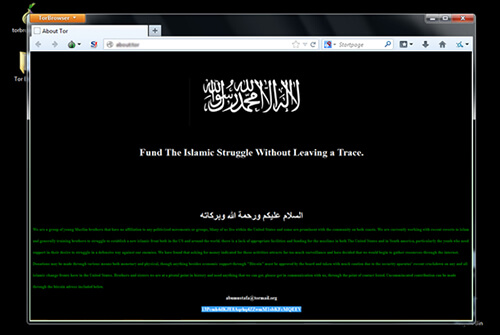 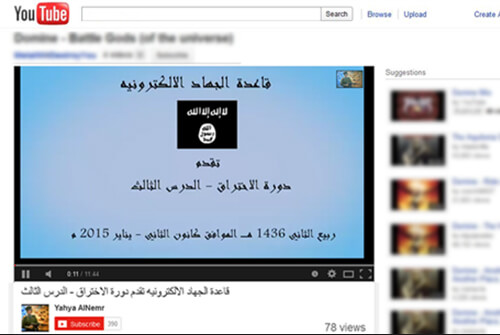 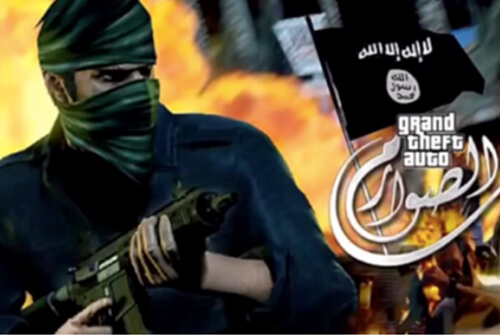 How ISIS Twitters Keep Coming Back to Life?